The Transcendence of Christianity Over other Religions

I argued below that pagan myths and non-Christian religions can contain truth and therefore believers should be careful not to go to extremes in trying to deny parallels between Christianity and other faiths. However, that does not mean that all religions are on par with Christianity. Jesus is absolutely the only way, truth, and life.

Nostra Aetate offers a balanced view in this area. Even as it affirms that truth is found in other systems, the document notes that the Church is duty bound to proclaim Christ, “in whom God reconciled all things to himself” and “men find the fullness of their religious life.” The last part of that sentence is an important key to understanding orthodox Christianity’s approach to other religions: they must be understood in relation to Christ because he is the full self-revelation of God and as such is absolutely unique. Indeed, unique is not an adequate term to describe Christianity because it insinuates that Christianity is just a myth with different characteristics than the rest. That doesn’t quite capture what I am saying here. Christianity is not just a different religion; it is transcendent over the other religions. It is a different kind of thing altogether. The myths are man’s feeble attempt to explain the divine. Christianity is the divine come down to man. 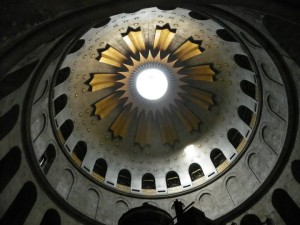 As Fulton Sheen points out, transcendence “does not consist in proving that Christianity is better than any other religion, but that it is above comparison. Transcendence is a ‘change of degree, order, and species’…Transcendence does not imply that Christianity must bear no resemblance to pagan religions, because similarities do not prove the same cause; nor that Christianity enjoys truth and all other religions are in darkness, but rather that it has historical superiority over them” (241). Sheen is saying that while pagan myths result, at least in part, from man’s attempt to understand the knowledge of God found in creation (general revelation), Christianity is all about God’s special revelation in time and space.

C.S. Lewis refers to the Christian revelation of God coming down to earth in time and space as “myth become fact.” In his wonderful sermon “The Weight of Glory,” Lewis eloquently summarizes the major theme of these last few posts:

The Divine light, we are told, “lighteneth every man.” We should, therefore, expect to find in the imagination of great Pagan teachers and myth makers some glimpse of that theme which we believe to be the very plot of the whole cosmic story—the theme of incarnation, death, and rebirth. And the differences between the Pagan Christs (Balder, Osiris, etc.) and the Christ Himself is much what we should expect to find. The Pagan stories are all about someone dying and rising, either every year, or else nobody knows where and nobody knows when. The Christian story is about a historical personage, whose execution can be dated pretty accurately, under a named Roman magistrate, and with whom the society that He founded is in a continuous relation down to the present day. It is not the difference between falsehood and truth. It is the difference between a real event on the one hand and dim dreams or premonitions of that same event on the other. It is like watching something come gradually into focus; first it hangs in the clouds of myth and ritual, vast and vague, then it condenses, grows hard and in a sense small, as a historical event in first century Palestine. This gradual focusing goes on even inside the Christian tradition itself. The earliest stratum of the Old Testament contains many truths in a form which I take to be legendary, or even mythical—hanging in the clouds, but gradually the truth condenses, becomes more and more historical. From things like Noah’s Ark or the sun standing still upon Ajalon, you come down to the court memoirs of King David. Finally you reach the New Testament and history reigns supreme, and the Truth is incarnate. And “incarnate” is here more than a metaphor. It is not an accidental resemblance that what, from the point of view of being, is stated in the form “God became Man,” should involve, from the point of view of human knowledge, the statement “Myth became Fact.” The essential meaning of all things came down from the “heaven” of myth to the “earth” of history.

The myths of pagan religions and cultures are shadows of the real thing. It is transcendent over religion in that it fulfills religion. This is why Jean Danielou can state that

there is, for religious man, no better way of being faithful to his religion than to adhere to revelation. This is why conversion to Christianity is never an infidelity for the pagan. This point should be emphasized over and over again. The pagan will keep all the religious values of his paganism, but he will find in Christ the response to all this his desires called for. As St. Paul says, this God for whom he was groping but only through shadows and symbols, this God comes looking for him to give Himself to him, and to reveal to him what he is. (24)

In this vein, Karl Rahner calls Christianity the “absolute religion,” (301) because only Jesus can bring participation in the divine life. He is not just another religious leader, but the one in whom all religions are judged and find their fulfillment. Pope John Paul II speaks along these lines in answering the question of why there are so many religions in Crossing the Threshold of Hope (80-81). He refers to Nostra Aetate in noting that men turn to various religions to answer life’s biggest questions, but all men “have one ultimate destiny, God, whose providence, goodness, and plan for salvation extend to all” and that even as the Church can affirm the “semina Verbi (seeds of the Word) present in all religions” and a “common eschatological root present in all religions,” the “Church is guided by the faith that God the Creator wants to save all humankind in Christ Jesus, the only mediator between God and man, inasmuch as He is the Redeemer of all humankind.”