The Uniquely Personal and Immanent God of Christianity

One unique aspect of Christianity is 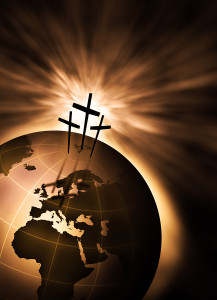 the type of knowledge that it claims to provide. Christianity offers relational knowledge of an immanent and personal being while all the other religions offer impersonal and abstract knowledge of ideas, principles, a vague and unidentifiable force, or a distant but personal deity . In other religions, the goal is to know about the divine as we know about gravity. In Christianity the goal is to know God as we know our parents, friends and spouse. The “godly” characteristic most emphasized in other religions is transcendence, while the God of Christian revelation emphasizes his immanence (while not downplaying his transcendence).

For example, R.P. Dunoyer notes that the religions of Japan, including Shintoism and the various Buddhist sects, seem incapable of rising above human horizons to contemplate a personal God (122). They are stuck with abstract and impersonal notions of the divine. Shintoism, for instance, “does not have the slightest notion of a spiritual interior life, of an intimate dialogue between man and his God” (102).

In another case, the Allah of Islam is primarily known by a host of names that express different aspects of his greatness. Muslims recite the names of God as a spiritual devotion, meditating on the various abstract qualities that he possesses (omnipotence, mercy, compassion, etc.)

When studying this, I was struck by the contrast between what a Christian and a Muslim would meditate on. While Christians also focus on God’s character qualities, they do so within the context of remembering what God has done and is doing in history. Psalm 77 is a model for many other Psalms and offers a good example of this. The Psalmist asks for God’s help as the one who is known for his love, mercy and compassion, (Psalm 77:7-9) but then provides support for those judgments by mentioning the miracles God has done in history, including bringing his people through the Red Sea during the Exodus (Psalm 77:11-20. The intimate knowledge that comes through shared experiences is unique to Christianity. As one booklet on Islam points out, “Islam holds that God is transcendent in a way that precludes the kind of intimacy he shows with mankind in the Bible” (20). The lack of depth and closeness of relationship between God and man in Islam means that the primary truth of the universe, namely that God is love, is missing from their theology. “Love is the keynote of Christianity that Islam lacks” (27).

As Pope John Paul II wrote, the theology of Mohammed and his followers is a reduction of Christian theology. It is a movement farther away from the intimacy of Christian revelation. “Some of the most beautiful names in the human language are given to the God of the Koran, but He is ultimately a God outside of the world, a God who is only majesty and never Emmanuel, God-with-us” (92).

The fact that God has not remained outside of the world is a major focus of a Jean Danielou article about the uniqueness and superiority of Christianity to other religions. He notes that the one of the major novelties of Christianity is that its adherents place their faith in an event, not an ideal or philosophical proposition or anything else (150). God is known and is known to be trustworthy based on his intervention in time and space. No other religion speaks of the eternal as breaking into the temporal in this way. This is unique to Christianity and finds its perfection in Jesus. I really appreciated Danielou’s insight into the fact that this intervention actually “gives time consistency and transforms it into history” (150). I think this helps explain much of the difference between Western Civilization and the rest of the world. The West has been built on a linear, apocalyptic view of time.  That is to say that we have believed that time has a purpose and is headed toward a final and irrevocable culmination. We believe in history and take it seriously. This view is explicitly and uniquely Judeo-Christian. Societies built on other worldviews, with their views of time as cyclical or meaningless, simply do not live the same way. They do not understand history as the West does. Unfortunately, the West is losing this understanding of time as it sheds and denies its Christian underpinnings. Now our children are taught that time as meaningless and “History is bunk” (Henry Ford), just one more symptom of our regressing and dying age.

Indeed, both John Paul II and Danielou point out that non-Christian religions and theologies are only valuable as a pre-cursor to Christianity and any acceptance of them after receiving the light of Jesus is indeed a regression. The pope notes that Islam, for example, reduces God’s revelation and sets it aside to return to a more primitive view of the divine (John Paul II, 92). Danielou refers to pagan religions as “out of date” in that they served a purpose leading up to Christ, but now should accept their status as forerunner and accept that Jesus is their fulfillment. That is why conversion from another religion to Christianity will always be a “rupture.” Christianity purifies whatever errors the other religions have fallen into and consecrates whatever truth they contain, assuming its value into Christ (Danielou, 159).