Noah to Jesus: How the Flood Story Displays God’s Plan of Salvation 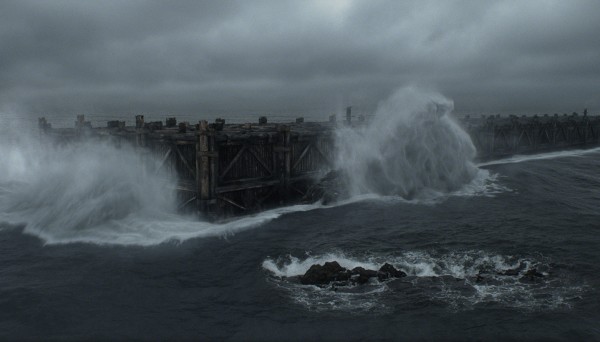 Just to clarify, the title of this post does not refer to the Noah movie. As I’ve stated elsewhere, I think the film is an unscriptural mess that disparages God’s character and undermines the gospel. In other words, the movie makes God look bad and confuses distorts his plan of salvation. In this post I’ll be talking about the actual biblical account and how Christianity has traditionally interpreted it.

Before I get to that, however, I would like to address one aspect of the controversy over Noah that has me puzzled and dismayed. Why do so many Christians think the essence of the film stays true to the Christian view of the flood narrative? I get how someone might think that it is essentially compatible with Gnosticism, environmentalism, or some elements of Jewish midrash, but Christianity? I just don’t see it.

For example, Christianity teaches that Noah was a preacher of righteousness who obeyed a patient and gracious God in calling the people to repentance so that they might be rescued from the just consequences of their wickedness and given new life. In the film, however, Noah is a homicidal maniac, literally fighting to keep people from the means of their salvation, obeying a god who gives sinners no chance to repent and wants innocent teens left behind to drown! The Noah of the movie is one of the most unlikable lead characters I’ve ever seen in a film, and the god he follows comes across as even worse. (It actually seems that Noah teaches god a lesson in love at the end of the film.) The movie god and the movie Noah are exact opposites from their biblical counterparts and the plan of “salvation” presented in the movie is capricious and unjust.

So why do so many Christians seem unable to recognize the differences between Noah the movie and the orthodox Christian understanding of Genesis 6-9?

Ignorance of scripture? Well, yes and no. On one hand the movie has caused people to open their Bibles and read Genesis for themselves, so people do know the actual flood story better than ever. In that sense they aren’t ignorant of that text. However, those same people often have no idea how the flood story relates to the rest of scripture, especially the New Testament. In this sense they are ignorant of scripture, and this has been the source of many problems. Rather than speak from a fully informed and specifically Christian interpretation of the flood narrative, many followers of Jesus are trying to wrestle only with the text in Genesis.

As Christians, we don’t need to do that. We have the rest of God’s redemptive history to work with, and it sheds plenty of light on what was going on with Noah and his big boat. For example, Christianity teaches that Noah was a forerunner of several other prophets and even an image of Jesus himself. Christianity also holds that the flood story is a model of how God deals with sin and offers new life to the world; it is a precursor to several other similar episodes in the Old Testament and ultimately a picture of baptism and a model of the gospel itself.

For example, there are several parallels between the flood story and the Exodus. As such, we can look at the Exodus account to help shed light on what was going on with Noah. 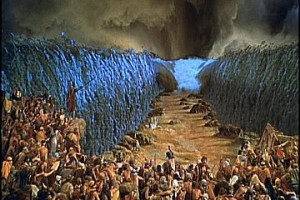 We’ll start with the famous story of baby Moses. The Egyptian king had ordered that all male Hebrew babies be thrown into the Nile River (Exo. 1:22). To save Moses, his mother made a basket, put him in it, and placed it in the reeds along the bank of the Nile. One of the Pharaoh’s daughter’s found the baby and raised him as her own. She is actually the one who named him Moses, which means “I drew him out of the water” (Exo. 2:10).

So Moses’s situation is similar to that of the people of Earth at the time of the flood: sentenced to death by water but in the end the waters are the source of new life. The waters of the Nile are reminiscent of the flood waters. However, Moses, like Noah before him, escaped that judgment by entering into an ark. Indeed, not only did Moses survive, but he was given a new life as a royal son. Moses entered into the water a slave, but came out of it as a member of the king’s family! There is a very real sense in which Moses was born again in that water. He had been recreated by being drawn out of the water. Indeed, from an Egyptian perspective (they believed the king was a god,) Moses had been given divine life. This was also God’s plan for Noah. As a new Adam, Noah was the first in the line of a new family of God on earth.

The parallels between the flood and the Exodus extend further. Like Moses, the Israelites as a whole were also in the same position as the people of Earth before the flood: they were under penalty of death; part of a sinful culture that was under God’s judgment. However, the link between the situation of the Israelites in slavery and humanity at the time of the flood is even more explicit in that the problems of the Israelites in Egypt were allegorically the problems of mankind after the fall of Adam. The Israelites were 1) separated from their true home, 2) in slavery to the Pharaoh, and 3) under God’s judgment for worshiping false gods. In the same way, the people before the flood were 1) separated from God, having been kicked out of the garden, 2) in slavery to sin and Satan, and 3) under God’s judgment for worshiping false gods. It is the same three-fold problem we all face today, by the way.

The Red Sea account and the flood are also similar in the way the people were saved. Like those who followed Noah into the ark and through the water before them, those who followed Moses through the waters of the Red Sea were spared. The dry land appeared in the sea, just as when the waters receded after the flood. The Red Sea crossing was a creative act that also destroyed evil. As such, it conformed perfectly to God’s previously established pattern for dealing with sin. God graciously and mercifully created a new people by having them follow one man through the water. Noah and Moses were both given new life, but not for their own sake. They were both heads of a family and the means of that family’s salvation, in the sense that those who wanted to be saved needed to follow their leader and all those who refused this invitation were left to their own devices.

So the Exodus sheds some light one how we should understand the flood. It wasn’t a massacre of people who never had a chance to repent or had never heard of what they needed to do to be saved. The flood was a merciful act of new creation, one in which all those who wanted new life in the new family of God needed to follow Noah into the ark and through the water.

This is not the end of the story of redemption, of course. Like Noah and his family, Moses and the Israelites are types. They show us how God works and foreshadow his ultimate purpose, which is to create a spiritual and eternal family. He does this, as usual, through water and one special man.

By now I suspect that you can see where I am going with this: Jesus is like Noah and Moses in that he is the one who defeats evil and leads us to new life.

We have seen that in each episode (the flood, Moses birth, and the Red Sea crossing) God brought “divine” life out of the water. Moses was drawn out of the water to be part of the royal family, and in the other cases God brought entire groups out of the water to be part of his family. In the case of Jesus, there is no need for quotation marks around the word divine. Jesus actually is God, and new life in him is actually divine life. Here we have the fulfillment of everything God had been working toward since the fall: the new Adam that all the other “Adams” including Noah, had been pointing toward.  With Jesus, God’s plan for creating a new family of God through one special man finds fulfillment.

That is why the entrance rite of the Church has always been baptism. We enter the baptismal water under God’s judgment and as slaves to sin and to Satan; we come out of it as free children of God. In fulfillment of the action of the flood and the Red Sea, our evil nature is destroyed in the water and we are granted new life. These connections between the flood, the Red Sea crossing, and baptism are explicitly made by Peter in 1 Peter 3:21 and Paul in 1 Corinthians 10:2.

God’s goal at the flood was to purify the world and create a new people of God, not to eradicate humanity or blindly exercise some sort of vindictive and arbitrary judgment. God’s goal is still to create a new people of God. Jesus is the final new Adam, new Moses and new Noah.  By looking at the big picture, we find that the flood account is very similar to several other acts of God and together they display a very consistent and clear model revealing God’s character and plan for the world. And that plan is Jesus. The biblical  flood story is ultimately about Jesus and his Church. Noah is not.

Donald Johnson is the author of How to Talk to a Skeptic: An Easy-to-Follow-Guide to Natural Conversations and Effective Apologetics