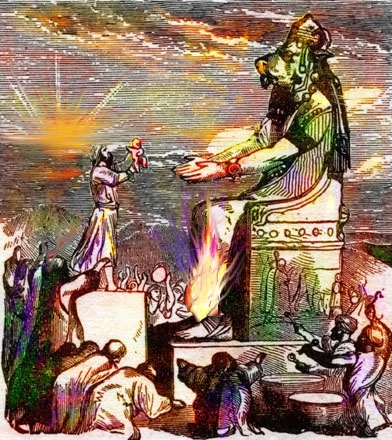 I wrote in a previous post that abortion is essentially the same as pagan child sacrifice in that it involves the killing of babies in an effort to attain physical pleasure and material wealth. Abortion and child sacrifice to idols are similar in that the motivation of the parents is the same, the result for the child is the same, and the evil spirit behind it is the same. Today brings two fresh examples of this truth.

In a piece at Salon.com, Mary Elizabeth Williams asks, “So what is abortion ends life?” She’s all for it anyway. Williams admits that she knows there is a human child in her womb and that the usual pro-abortion arguments are ridiculous. However, that is not going to stop her from “sacrificing” the baby in order to gain something she feels more valuable, such as not having to be a forty something caring for a newborn. Heck, if she found out today that she was pregnant, she’d have the “World’s Greatest Abortion.”

Meanwhile, the Center for Reproductive Rights saw fit to release a creepy video celebrating the 40th anniversary of Roe vs. Wade. Frankly, I have no idea what they were thinking in making this video, but what I see is a man exalting over the fact that he can have consequence free sex. It reminded me of an old Chris Rock line about picking up women at abortion rallies because he know they would be [easy]. As Mike S. Adams rightly put it on his Facebook page: “Our nation has reached its final hour. Child sacrifice for liberation. Men’s liberation.”

It may or may not be our final hour, but this certainly marks a new level in our descent into paganism and the celebration of evil. We must fight harder to end the sacrifices.

(For more on the video, see these good articles by Doug Wilson and Rachel Jankovic.)