You Can Believe Because of the Evidence, Not in Spite of It – A Review of Cold Case Christianity

Religious skeptics like to present themselves as harbingers of reason, courageous and deep thinkers who base their beliefs entirely on the evidence, standing boldly against the tide of irrational Christians who take blind leaps of faith and accept propositions in spite of the evidence. They continually perpetuate the notion that idea that the evidence is on their side and that Christians either don’t care about evidence or don’t want to look at it. For example, I once interviewed Edward Kagin of American Atheists, and he spent the entire show operating from the premise that belief in the God of the Bible was equivalent to accepting the existence of invisible unicorns. The obvious implication was that there is no evidence for these types of claims and Christians who believe in God do so in spite of that fact and with an abject refusal to think through the silliness of their position. This is why Daniel Dennett has encouraged skeptics to call themselves “brights” in order to distinguish themselves from dim-witted believers who have to put their brains in their back pockets in order to believe. These skeptics think that to have “faith” is to accept something as true even though you have no reason to! As Richard Dawkins puts it, faith is “blind trust, in the absence of evidence, even in the teeth of evidence.”[1] It is “evil precisely because it requires no justification and brooks no argument.”[2]

This is ridiculous. While Dawkins may have a point in regards to how some religions define faith, this is certainly not the Christian definition of the term. Biblical faith is not about abandoning the evidence, it is about responding to the evidence.

According to the author of Hebrews, “faith is confidence in what we hope for and assurance about what we do not see” (Heb. 11:1). Now, some might look at that and say, “There you go. It’s right there. To have faith is to believe in something you can’t see. In other words, you don’t have any evidence for it!” Not at all. Faith in this passage, and in the rest of the Bible, primarily deals with the future. It is to trust that God is good and that he will do what he has promised he will do. We do not see what we are hoping for because it hasn’t happened yet. However, this is not to say that we do not have any evidence on which to base our trust. Quite the contrary: biblical faith is always based on evidence. Those people in the Bible who have faith trust that God will do what they hope for because they have seen evidence that he is trustworthy! For example, what gave David the faith to face Goliath? The fact that he had already experienced God’s protection and victory in facing a lion and a bear! David had good evidence of God’s power; therefore he was able to have faith (1 Sam. 17:34-37).

This is God’s pattern throughout history. He doesn’t ask his followers to believe without any evidence or in spite of the evidence. Rather, God gives people evidence and then asks them to trust him in light of it. Faith is to be based on evidence; it is not something that is to develop without evidence. Here are a couple of more quick examples, one from each Testament.

When Moses appeared before the Pharaoh to demand the release of the slaves, he explained that he was there on behalf of the LORD, the god of Israel. Pharaoh refused his request with a question: “Who is the LORD, that I should obey him and let Israel go?” (Exo. 5:2). There were plenty of gods in Egypt and the Pharaoh didn’t think this one was worth worrying about. Notice that God did not respond with an appeal to “just believe.” He didn’t ask the Pharaoh to obey despite the lack of evidence. Instead, just as God gave Moses several signs of his power when Moses was hesitant to obey (Exo. 4:1-14), he proceeded to give Pharaoh and the people of Egypt a series of signs as evidence that they should trust and obey as well.

By the end of the plagues, the answer to the question “Who is the LORD?” would be made clear through a display of God’s power, not a feeble request for blind acceptance of a proposition. God then took his people through the Red Sea (Exo. 14), miraculously provided them food and water (Exo. 15:22-17:7), and supernaturally defeated their enemies in battle (Exo. 17:8-16). All of these actions were intended to give evidence to the people that God was worthy of their trust. They were to have faith that God would get them to the Promised Land because they had good evidence that he was willing and able to do just that. When the people got to the edge of the Promised Land and then refused to enter it out of fear, God became angry precisely because they did not take into account all the evidence he had already presented to them (Num. 14:10-12).

God’s revelation of himself in Jesus followed the same pattern as his revelation of himself to Pharaoh and the Israelites. Jesus presented evidence to back up his claim that he was the God who had power and authority over all. Just as the plagues showed God’s power over every realm of existence (the gods of Egypt and the natural forces of Earth), Jesus’ miracles showed his power and authority over the very same entities.

The famous story of Jesus calming the sea is illustrative.

A furious squall came up, and the waves broke over the boat, so that it was nearly swamped. Jesus was in the stern, sleeping on a cushion. The disciples woke him and said to him, “Teacher, don’t you care if we drown?”

He got up, rebuked the wind and said to the waves, “Quiet! Be still!” Then the wind died down and it was completely calm.

Notice the word “still” in Jesus’ last sentence. The key to understanding his rebuke of the disciples is to realize that they had already seen Jesus do many miraculous signs and wonders. He had shown his power and goodness in casting out demons and healing many sick and lame (Mark 1:21-3:12). The proper response to the storm would have been to remember that Jesus had been willing and able to exert authority over every other realm of existence and surmise that he could handle this, too. Jesus was not asking them to trust him to keep them safe on the boat for no good reason. He had already given them evidence. Based on the evidence, they were to have faith.  We are to have faith for the very same reason.

Unfortunately, many Christians perpetuate the fallacy that our religion is fideistic because 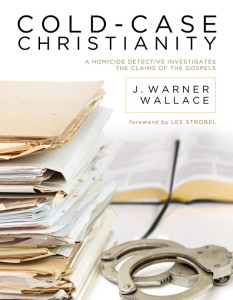 they don’t realize that God wants them to be thinking people who follow the evidence where it leads. They think that faith is blind acceptance of unjustified claims. That is one reason books such as J. Warner Wallace’s Cold Case Christianity are so important. They affirm for us that Christianity welcomes an examination of the evidence. Indeed, it relies on it.

As a veteran LA County cold case homicide detective, Wallace understands the value of evidence. He also knows how to deal with different types of evidence in trying to understand what actually happened in the past. In this wonderful book, Wallace applies these principles to the examination of the claims of Christianity, particularly the gospel accounts. In doing so he teaches the reader how to use the process of abductive reasoning to infer the conclusion that best fits the evidence. He also talks about the different categories of evidence, noting that circumstantial evidence is invaluable in building a case for any historical event, including the life of Christ. Throughout the book Wallace deftly employs real life examples from his police work that bring the teaching to life. I particularly enjoyed the section on forensic statement analysis and Wallace’s explanation of how the different gospel writers provided unintentional eyewitness support for each other.

Cold Case Christianity is a great read and I highly recommend it.