What Christians can Learn about Evangelism from Obi Wan and Gandalf

When you think of trying to convince someone to become a Christian, what image comes to mind? Door to door salespeople? Sign wielding street preachers? Perhaps a Christian college professor armed with a wide array of facts and abstract arguments? While these types of evangelism have their place, most of us simply don’t have the personality or expertise to practice them, so we don’t, and rightly so. I would like to suggest another model, one that the rest of us can follow. Let’s call it the Obi Wan and Gandalf method of evangelism. 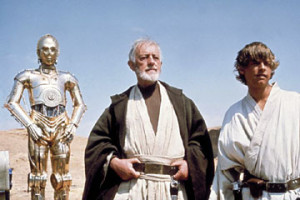 The original Star Wars trilogy by George Lucas and the Lord of the Rings series by J.R.R. Tolkien are similar in many ways, including the fact that the hero of each tale has to be convinced to join a rebellion against great evil by an older sage-like character. In A New Hope, Obi-Wan Kenobi talks Luke Skywalker into joining the alliance to fight Darth Vader and the wicked Empire. In The Fellowship of the Ring, Gandalf finally wins over a reluctant Frodo, who agrees to try to destroy the evil Sauron by taking the One Ring to Mordor and casting it into Mt. Doom. If you are familiar with these stories, you will know that Obi-Wan and Gandalf did not succeed in their task through salesmanship or rhetorical skill or fine philosophical arguments. They primarily told an exciting story and invited the boys to join a great

adventure. More specifically, they filled the young men in on the where they fit in the epic battle that defines the history of their universe. Gandalf and Obi Wan inspired Luke and Frodo to act by giving them a history lesson that revealed just how important and meaningful their lives were.

We can do the same thing. People need to know their own story. These may be fictitious examples, but Tolkien and Lucas were simply revealing a principle that we can find displayed throughout the pages of scripture.  For example, the apostles spread the gospel by explaining how Jesus was the fulfillment of all that God had been doing in history up to that point (see Peter in Acts 2, 3, and 4, Stephen in Acts 7, and Paul in Acts 17). In other words, they told people the story of the world. This message inspired thousands, through the work of the Holy Spirit, to give their lives to the rebellion led by Christ against the evil principalities and powers that rule this present darkness (Eph. 6:12). We can do the same thing. Just like the apostles, we should reach out to people by telling them God’s story and inviting them to be a part of the magnificent adventure that continues today.

(If you are looking for some resources to help you do that, click here and here.)