The Evolution of God?

If there is no God, how did humans get the idea that he exists? Skeptics offer a wide variety of naturalistic explanations. One popular model postulates that the idea of God has evolved over time. According to this view, humans are atheists by default. However, at some point in his evolution man started having dreams and primitive cultures “developed a concept of the soul, then of many gods, then, paralleling the rise of royalist society and great empires, monotheism. The next step would occur when this process became self-conscious and man realized he was alone in the universe and God was one of his 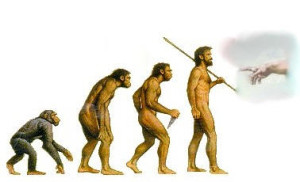 creations.”[1]  In other words, humans should be atheists, but primitive people didn’t know anything about fire, so they made up a story about how the Great Coyote stole the flames from the top of a mountain. This is where the pagan myths and polytheism came in. Then they moved on to believing an invisible God controls the lightning that caused the fire. Finally they gained enough knowledge to understand the forces of nature that actually cause natural phenomenon and become atheists again (at least the smart ones became atheists). This theory was made famous by a nineteenth century anthropologist named Edward Tylor.

When Tylor suggested his model, it was rightly concluded that if it is true, we should be able to find evidence of it in primitive tribes who have not advanced very far along this path. These groups should either be atheists who haven’t yet made up any myths to account for the world or polytheists worshiping the myriad of mythical gods that the rest of the civilized world has already abandoned. There should be no evidence of monotheism or a god who stands above all, especially one that was known before the mythical gods.

Eager young social scientists spread out around the globe to prove Tylor’s theory and the first reports seemed to lend it support, as most tribes worshiped a pantheon of deities but there was little talk of monotheism. However, after a bit more time with the various tribes, very similar stories started popping up of a supreme God that was known long before the smaller gods were worshiped.

anthropologists reasoned that if one wanted to study the origins of religion, one had better go to the most primitive tribes, assumed to be the aborigines of Australia. So a great deal of debate swirled around the Outback. The first reports claimed aborigines had hardly any religion, certainly no concept as advanced as a Supreme God. Then reports came in from many directions of an omniscient being known as Bunjil, Daramulun, Baiame, or Nuralie.[2]

Skeptics such as Tylor blamed missionaries for planting this concept among the aborigines, but that notion quickly became untenable. Other theories were also put forward, but the bottom line, as recorded by anthropologist Emile Durkheim, herself an advocate of the evolutionary view, is that the aborigines believed in one Supreme God:

The characteristics of this personage are fundamentally the same everywhere. It is immortal and indeed an eternal being, since it is derived from no other…He is spoken of as a sort of creator. He is called the father of men and is said to have made them…At the same time as he made man, this divine personage made the animals and the trees…He is the benefactor of humanity…He communicates…the guardian of tribal morality, he punishes…he performs the function of a judge after death distinguishing between the good and the bad…The feel his presence everywhere.[3]

Don Richardson’s research confirms these findings.  His classic work Eternity in Their Hearts recounts case studies from all over the world. He notes that the anthropologists “began discovering what thousands of missionaries had already known for a hundred years – that 90 percent of the world’s folk religions are permeated with monotheistic presuppositions.”[4] They universally believe that the creator God is good and that he should not be represented by idols.

So why did this creator god not play a more important role in the day to day life of these pagan cultures? Researcher after researcher reported that the tribal people believed they had been alienated from the one true God due to the rebellion of their ancestors.

For example, when 19th century Norwegian missionary Lars Skrefsrud started sharing the gospel with the Santal people of Bengal, they explained to him that he was talking about Thakur Jiu, the creator God. This greatly excited them because it proved, as many of their sages were exclaiming, that “Thakur Jiu had not forgotten them after all this time.” It turns out that Thakur Jiu had been known by the forefathers of the Santal, but they no longer knew him well because the first man and first woman had offered a sacrifice to Satan and become alienated from God. Later, after a great flood, the people had been divided and some of them had worshiped the mountain spirits.[5] As Richardson explains, a similar story can be found from South America to Southeast Asia. The people had many gods and many myths, but above them stood the one true God, from whom they were alienated. The gods of the myths came to have prominence in day to day life only after that separation.

The evidence suggests that belief in a one true God is more fundamental to man than the gods of the myths. According to the folk religions, monotheism is not just one more myth, or even all of the myths condensed into one. Rather, the one true God came before the myths and transcends them. As G.K. Chesterton writes, “There is nothing to show that [the idea of one true God] is an improved product of mere mythology, and everything to show that he preceded it…Whatever else there was, there was never any such thing as the Evolution of the Idea of God. The idea was concealed, was avoided, was almost forgotten, was even explained away, but it was never evolved.”[6]

[4] Don Richardson, Eternity in their Hearts: The Untold Story of Christianity Among Folk Religions of Ancient People (Ventura, CA: Regal, 1981),