The Association of Christian Car Thieves?

I recently read about a new Christian ministry that is making great inroads into a previously unreached subculture of American life. It’s called the Association of Christian Car Thieves (ACCT) and has opened chapters in 14 major American cities over the past 2 years. According to its website, the organization offers Bible studies, prayer groups, and summer camps for those who steal automobiles. 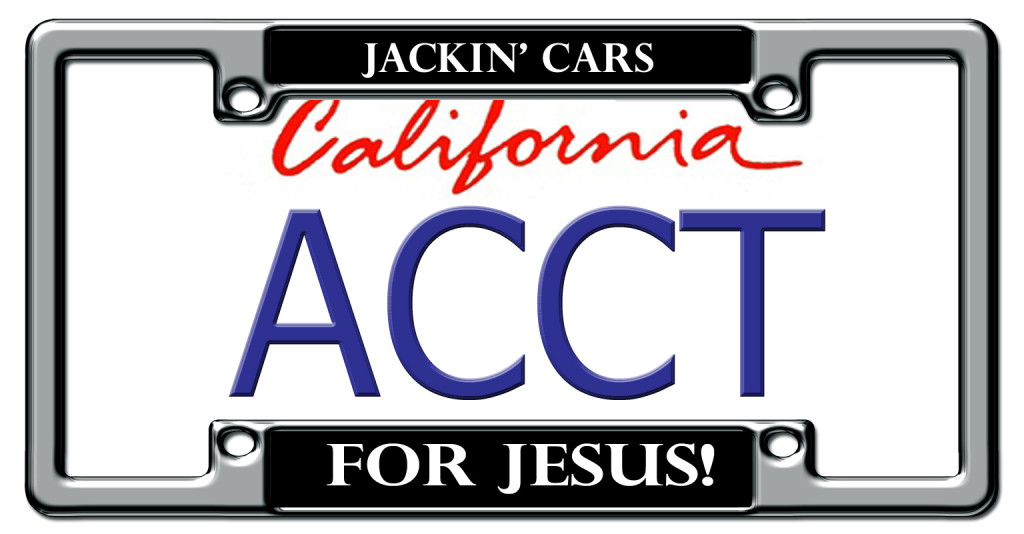 At first I thought this might be a ministry to prisoners and ex-convicts, perhaps something akin to Prison Fellowship. I assumed they taught folks how to live without resorting to taking other people’s property. But no. This group is not about instructing people not to steal. It’s about helping them live good Christian lives as thieves. “God loves us just the way we are,” said an ACCT spokesperson, “and at the same time God requires excellence. We want these guys to be the very best at what they do and use the gifts that God has given them. We teach them not to bury their talents in the ground. They should try to be the best thieves they can be.”

But isn’t there a commandment against this kind of behavior? Maybe, but that doesn’t bother one accomplished Los Angeles robber: “I’m as Christian as the next guy, but when I go out to jack a Porsche, I leave God at home. I’ve got a job to do.” An up and coming teenage prospect from Miami adds, “Listen, people lose their cars all the time. They get in accidents, they can’t locate their vehicles in the mall parking lot. How do you draw the line between what is an acceptable way to lose your car and what’s not. I’m just trying to provide for my family. Sure, some people may be against what I do, but out here in real world, you gotta get things done. God is all about getting things done. That’s what my ACCT chaplain told me.”

OK, of course none of the above is true. The absurdity of such a “Christian” approach to ministry should be clear. Christian theology simply does not allow for either a) stealing cars or b) thinking that Christian morality can be applied only in certain parts of one’s life. There is no place in a Christian’s day for “leaving God at home” while one spends some time living contrary to biblical teaching. There is no area of endeavor that is exempt from living a virtuous and holy life. Jesus didn’t say, “Be like me except when you are at work” or “Be holy except on weekends.” Christians are to be a light to the world every moment of their existence.

However, after reading last week’s Sports Illustrated cover story by Mark Oppenheimer, I’m not so sure that everyone gets this. Consider these passages from the article:

Les Steckel, a longtime NFL offensive assistant and the coach of the Vikings for one season, was a proponent of cut blocking, the dangerous tactic of aiming at an opponent’s knees downfield. When his players balked at cut blocking, he told them to man up. “I’d say, ‘Go cut ’em,'” Steckel recalls, “and they’d say, ‘But they have a career like me.’ And I’d say, ‘Well, they’re trying to take your career away from you.'”

Since 2005, Steckel has been president and CEO of the Fellowship of Christian Athletes, the international sports ministry group that organizes Bible studies, “prayer huddles” and Christian summer camps for athletes. Given that role, you might wonder if Steckel has any regrets about the years he spent urging techniques that could maim opponents. He does not. “God loves us just the way we are,” says Steckel, 66, “but at the same time He does require excellence. And in the NFL, performance is ultimate.”…

In 1994, [Sharon] Stoll asked a group of West Point football players, members of the Fellowship of Christian Athletes, about the role of intimidation in sports. As Stoll tells the story, “One of the linebackers says, ‘Ma’am, my job is to kick them in the head, knee them in the groin, stand over them and tell them never to get up.'” Stoll then asked how the linebacker would play against Jesus. “And the guy looked at me and said, ‘Ma’am, I’m as Christian as the next guy, but if I’m playing Jesus the Christ, I play the same way. I leave God on the bench.'”…

The attitude here seems to be that Christian morality can be abandoned in certain situations associated with sports in general and football in particular. It would be one thing is the interview subjects were arguing that trying to injure players and possibly end their careers was actually a moral act that can be defended biblically, or that the list of Christian virtues includes practicing illegal tactics while playing games and employing violent intimidation to ensure victory. We could have a debate on that, I suppose, but, as far as I can tell, that is not what they argue. Rather, these men seem to be saying that they know their actions on the field are not moral in any traditional Christian sense, but they have no problem practicing them anyway. Oppenheimer is right on point here (emphasis mine):

Steckel and Dee both insist their ministry helps turn thousands of people toward Christianity every year, saving countless wayward lives. “If you look at these athletes, [many] don’t have a dad, don’t have a father figure,” Steckel says. “These kids are dealing with so much, they are what the Word says: lost. Completely lost.”

But these coaches or chaplains seem less concerned with how the culture of football might also be unmaking Christians. “There’s no question of the violence that happens on a football field,” says Dee, 47. “I’ve had a thumb surgery and four knee surgeries because of football. And there seems to be some behavior, some aggression that one might think is counter-Biblical and counter-spiritual. But I think it has everything to do with the heart—how do you draw the line between what’s too physical and what’s acceptable? We teach that athletes have been given a gift, and it’s what you do with that gift that matters.”

What about the concussions, the broken bones? The abuse meted out to the bodies God gave us? “You know,” Dee says, “football is football. You can get hurt walking across the street.” That is the mantra of these ministries: Sports are self-contained moral universes. It’s O.K. to break bones if it’s for sport. Football can’t be subjected to the moral claims that pertain to other aspects of life.

Christian coaches and athletes point to the parable of the talents in the Gospel of Matthew. A master entrusts three servants with some talents, or coins. The two servants who use the money to make more money are praised, while the servant who buries his money in the ground is condemned for wasting what was given to him. Some Christians conclude from the parable that God wants us to use our God-given abilities as best we can; some sports-obsessed Christians take that conclusion a step further, excusing violence and hypercompetitiveness as obedience to God’s will that athletes do their best.

Christians would be wise to take this observation to heart. To think that God is fine with trying to injure people because it is done in the context of a socially sanctioned sporting event is ridiculous. Christian morality can never be divorced from certain aspects of one’s life, whether that be playing football, stealing cars, trading stocks, or taking your kids to a soccer game.

In conclusion, some qualifying and hopefully clarifying statements: This post is not about bashing sports ministries or the people that work with them. I personally know many who serve in these organizations as wells as many athletes who have been positively affected by them. They do good work and I am happy that they exist. Also, I am not saying playing football is morally equivalent to being a car thief. The point of this post is that defending particular acts of immorality in sports based on the fact that this immorality happens in the context of sports is bad theology and bad reasoning. Oppenheimer has done everyone a service by  exposing some instances of this wrong-headed thinking. I hope it is not widespread.

Update: In the original edition of this post I included a quote from the SI article from Gary Cramer. However, I have since had a pleasant conversation with Mr. Cramer and he feels his statements were taken out of context in SI. As such, Mr. Cramer emphasized to me that he does not agree with the notion that football is exempt from Christian morality and I take him at his word.