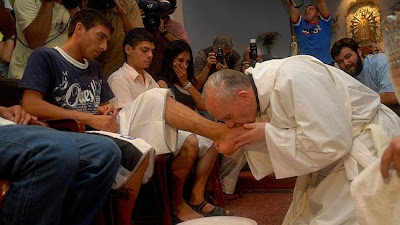 Pope Francis broke Vatican protocol again today by celebrating Holy Thursday’s Evening Mass of the Lord’s Supper at a juvenile prison, where he will kneel and wash the feet of 12 inmates. In the first week of his papacy, much has rightly been made of the Pope’s apparent humility. However, I think we should also focus on another virtue on display in these kinds of acts: his meekness.

Jesus famously taught that the meek are blessed and will inherit the earth (Matt. 5:5). The biblical term for meek connotes a wild animal that has been tamed. Think of a bridled horse that is submissive to the direction of his master. To be meek in the Christian sense, then, is to operate as a servant of God, doing his will and operating for his glory only. Jesus was saying that those who give themselves over to God’s direction are in a more favorable position than those who seek to keep control over their own lives.  A meek person does not seek his own glory; his gaze is lost in the eyes of the master. That clearly seems to characterize Pope Francis.

I bring this up because meekness is consistently derided in our culture. Rather than serve others out of obedience to another, we are told to take care of ourselves first and go our own way, whatever that may be. To be submissive to another is considered weak; to follow authority is considered demeaning.

For example, consider some of the more successful ad campaigns of recent years. Volkswagen explained to us that there are two kinds of people in the world: drivers and passengers. Drivers are better. Dr. Pepper assured us that the most important thing is life was to “be original” and “be you.” Dodge encouraged us to “grab life by the horns.” The common theme in these commercials was the notion that doing anything at the behest of anyone else is a sign that you are inferior and feeble. By purchasing these products, the companies claimed, you would make a declaration to the world that you are no such thing. Rather than a mindless drone submitting to the demands of others, you are a courageous adventurer, doing life your way.

The anthem of such thinking is, of course, My Way by Frank Sinatra. The song concludes:

For what is a man, what has he got?

If not himself, then he has naught

The record shows I took the blows and did it my way!

Notice the Frank doesn’t kneel. He isn’t submissive to anything or anyone. Rather, the only thing that matters is himself and his plan. As Jon Bon Jovi sings in an ode to Sinatra: “It’s my life,” no one else’s.

So is Pope Francis a weak man because he is meek? Clearly not. As even the L.A. Times reports, the Pope is a very effective leader and has been a force for good throughout his life.

Indeed, the ironic fact of the matter is that meekness is the key to true strength, while “going one’s own way” inevitably leads to passively accepting the demands of others.

The key is to understand that submitting oneself to God frees a person to live as the creator intended without having to worry what everyone else thinks. That is incredibly ennobling.

Consider Moses, a man the Bible calls the meekest man in the world (Num. 12:3). He could stand up to the Pharaoh and lead his people out of Egypt because he was living before and audience of one. He sought only to please his master and use the gifts God had given him. As such, he didn’t need to kowtow to the demands of the world.

In the same way, the apostles boldly proclaimed to the government officials who wanted them to stop preaching that they would obey God, not man (Acts 4:18-20). This tradition was continued by Paul and a long line of bold Christian witnesses up to this present day. (Check out Mother Theresa and Dietrich Bonhoeffer for great twentieth century examples.) To be meek is not to be spineless. Indeed, meekness has a strengthening and calming effect because you can leave the consequences of any particular situation in the hands of your master. You know a horse is well broken when the rest of the herd gets spooked by something unexpected but it stays under the control of the rider; it has the ability to not follow the crowd.

On the other hand, look at what the supposedly “brave” and individualistic people do who “stay true to themselves” end up doing: exactly what the world tells them is desirable! Think again about the actual message of the commercials and songs above.

VW claimed that only drivers (strong individuals who can’t be pushed around and don’t let anyone tell them what to do) drive Volkswagens, so if you were really a driver you would drive what we tell you to drive. You would submit to our opinion and, like all the other mindless drones out there, come down and pay us money for what we have convinced you you want.” This is as far away from individuality and “out-of-the-box decision making as you can get.

In the same way, Dodge wants us to “Grab life” and submit to their opinion of what is valuable in life. (And don’t forget, it’s a top-selling truck – everyone else is buying this pickup too!) Ultimately, the call of this commercial is to be a passive clone who thinks he is a strong individual.

Then there’s Dr. Pepper. They put celebrities on the screen to encourage you to be yourself. The only message a celebrity endorsement ever communicates is this: “I do and I am cool, so if you want to be cool like me, you should do this to.”  Originality and self-determination are the farthest things from the minds of these companies.

The spirit of the age that tells us to focus on ourselves turns out to be a call to be like everyone else. Notice the bland sameness of all our cultural “rebels.” If a kid tells his parents “I’m just being myself,” it’s almost a guarantee that he is actually mimicking and chasing after whatever the rest of the people in a particular group consider important. Certainly that is the case in the Bon Jovi video above.

Following God, on the other hand, leads to radical individuality. Each person has particular gifts, and God desires to allow us to use them. The truly meek have the power, then, the make the biggest difference in the world. This gives me great hope that Pope Francis is going to do a great amount of good.