Reflections on Mircea Eliade’s The Sacred and the Profane 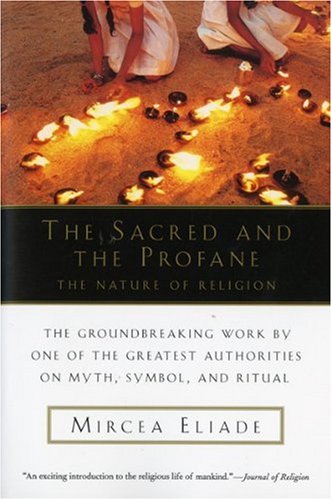 The Sacred and the Profane is a classic work of scholarship that provides strong evidence in support of a Christian worldview. Mircea Eliade’s study of the history of religions builds on and strengthens Rudolph Otto’s The Idea of the Holy, in which Otto argues that religious experience is wholly different than natural experience. Both books present a strong case against the atheistic position that religions are the result of naturalistic processes rather than a response to an objective supernatural reality.

For example, Eliade shows that the sacred is not the same as the profane, nor can it be explained as the result of the profane. Also, his work supports the the notion that Christianity is the fulfillment of other religions and transcendent over them,  rather than just one more in a long line of religions. We will look at each of these themes briefly.

The Objective Reality of the Sacred

For example, in his discussion of sacred space, the author notes that sacred space is always considered the “really” real part of the universe, while non-sacred space is ambiguous and without structure (20). That is to say, the sacred is the solid, fixed point from which all else is oriented, while the non-sacred is a formless expanse without essence. Profane space is characterized by chaos and homogeneity and relativity (22) while sacred space is ordered and distinct and moral. When reading this insight I was reminded of The Great Divorce by C.S. Lewis. That story takes place in a “landing area” between Heaven and Hell in which people are given a choice regarding which place they would like to live for eternity. Heaven is portrayed by Lewis as the real and solid place, while Hell is small, indistinct, and wispy. This matches up nicely with Eliade’s observations.

Given these descriptions, profane space is unlivable. It does not provide a context within which anything can be accomplished, because, as Eliade rightly notes, “Nothing can begin, nothing can be done, without a previous orientation – and any orientation implies a fixed point” (22). As such, one never finds man living a completely profane existence. No matter how much he has tried to live without religion, “the man who has made his choice in favor of a profane life never succeeds in completely doing away with religious behavior” (23). He cannot get rid of everything sacred because the profane does not provide him with a basis for his existence or a means of living it out.

I would add that in the same way, the profane does not provide a basis for the existence of the sacred. If ultimate reality is profane (chaotic, homogenous, and relative), there is no way that it could produce a reality that is ordered and fixed. The ephemeral does not encompass and account for the eternal. On the other hand the eternal can encompass and account for the ephemeral. If ultimate reality (the “really real” part of our existence) is sacred, it makes sense that profane aspects could also exist. Light can account for darkness, darkness cannot account for light.

Eliade shows that sacred space is understood as a place where the eternal meets the temporal, where the divine dwells with the merely human. This type of space would make no sense in a reality that is actually and only profane. If reality was profane, mankind would not have the necessary foundation upon which to construct a “sacred” reality. On the other hand, if reality is both sacred and profane, it makes sense that man would have spaces to indicate where the two spheres coincide. The idea that religions, and the sacred spaces that are an integral part of their observance, are a result of a purely profane world does not match up to the evidence of our experience.

This principle can also be seen in Eliade’s discussion of the construction of sacred spaces. He notes that the building of a sacred space is not a work of man in the sense that man designed it or consecrated it through his own will or effort. Rather, sacred spaces are built on the model of the gods. In building a sacred place, man is emulated the creation of the world by the divine. This act is motivated by a desire to “take up his bode in objective reality” (28) and escape the illusion and relativity of profane life.

Again, I think this provides evidence that the objective reality man is trying to emulate actually exists. Skeptics would argue that the “illusory” life of profane experience is actually real and should be boldly accepted as such, while the “solid” life of the sacred is actually an illusion. However, this makes no sense. Shadows do not produce rocks, rocks produce shadows. The less real cannot make something more real, it only happens the other way around. Mankind is not making up creation stories with the construction of sacred spaces, we are emulating creation stories. In other words, our creation myths do not present a god who is the result of time and space; rather time and space are the result of creation. “The sacred reveals absolute reality and at the same time makes orientation possible; hence it founds the world in the sense that it fixes the limits and establishes the order of the world.” The profane simply cannot do this. As such, the construction of sacred spaces is another piece of evidence against the idea that the sacred is something profane man has created.

Another charge made by the skeptic along the same lines is that religion is an escape for weak minded people who don’t want to face up to the ambiguity and meaninglessness of life. The idea here is that religious people create the sacred, a “world of dream and imagination” (94) in order to avoid the “real” world.

There are many problems with this charge, but we will focus here on the one Eliade points out in his discussion of sacred time and myths. He notes that an “essential characteristic” of religious people from primitive time has been an “ontological obsession,” a “nostalgia for being.” The sacred does not provide an escape from reality; it provides a return to reality. It is a door to the beginning of time, when man and gods lived together in peace and perfection. In entering the sacred, man longs to recover “the strong, fresh, pure world that existed in illo tempore” (94). This existence is the really real and everything since the fall from the state has lacked its substance. We now live in the shadowlands, to quote Lewis again. As such, religious devotion is not an escape or an avoidance of reality, as Kant would have us believe, but rather the bold acceptance of reality. To enter into the sacred is to face the facts as they are. On the other hand, to try to live as if the world is only profane can much more rightly be called an avoidance of reality. It is the man who refuses to face the sacred who is the one trying to escape from what is really real.

Alice Von Hildebrand seems to speak of this attitude when she notes that many skeptics of religion take part in a “metaphysical shaving process” in which they reduce the higher to the lower. They “shun the effort to perceive the nature of certain objects” and lazily accept interpretation that have “pseudo obviousness,” (Von Hildebrand, Introduction to a Philosophy of Religion, 17) such as the idea that the material and profane is all there is.

Christianity and Other Religions

In Introduction to the Great Religions, Jean Danielou noted that two dangerous attitudes can arise within the topic of comparative religions: a sectarianism which looks with disdain upon religions other than one’s own and a syncretism which accepts all religions as basically equal. He argues that the Christian position is to see some elements of preparatory truth in the cosmic religions while acknowledging that Christianity is distinct and transcendent over them. This position is supported by Eliade’s research.

For example, Eliade points out that most of the world’s primitive tribal religions (what Danielou would call cosmic religions) practice rituals that are intended to re-actualize the original creation event. “What is involved is, in short, a return to the original time, the therapeutic purpose of which is to begin life once again, a symbolic rebirth” (82). He further explains that the conception underlying these customs is that life cannot be repaired. We have to return to the beginning and start over again. While Christianity certainly accepts the notion of the need for re-birth, this birth is not simply a return to the beginning; it is the making of something completely new. In Christianity, time is not circular; it is linear, progressing toward a culmination. Life can be fixed, and one day we will live without pain and suffering and longing and every other consequence of the fall. We are not stuck endlessly repeating the same reality because the eternal God enters into time to move it towards his ends. As Eliade states, “Judaism presents an innovation of the first importance. For Judaism, time has a beginning and will have an end. The idea of cyclic time is left behind. Yahweh no longer manifests himself in cosmic time (like the gods of the other religions) but in a historical time, which is irreversible” (110). Christianity then takes historical time to a whole new level with the incarnation. In taking on a “historically conditioned human existence,” God sanctified time and made it a “new dimension of the presence of God in the world” (112). Christianity, then, affirms that the cosmic religions were right in seeking after a cure for what ails the world in re-birth, but corrects and fulfills that longing by teaching that the solution to man’s problems in new creation in Christ.

An example of Christianity being the fulfillment of cosmic religions is presented in Eliade’s discussion of the sacredness of nature. He notes that cosmic religions share many common symbols. For example, water is universally seen as that from which all else springs and commonly is associated with both death and rebirth. Immersion in water is understood as a return to the primordial chaos and is equivalent to death, while at the same time being the source of fertilization and regeneration of life (130). These ideas have been incorporated into Christianity since the very beginning of the Church. The Fathers saw God using water as a means of destroying evil and at the same time bringing forth new life at creation, the flood, the crossing of the Red Sea and, of course, baptism. However, as Eliade rightly takes pain to make clear, “these new valorizations of baptismal symbolism are nowhere in contradiction to the universally disseminated aquatic symbolism” (135, italics in original). Christianity does not oppose these ancient symbols, it fulfills them. In baptism we see the point in history to which all these revelations were leading. “The revelation brought by faith did not destroy the pre-Christian meaning of symbols; it simply added new value to them” (137).

The Sacred and the Profane offers a wonderful array of examples that support not only a supernatural and theistic worldview, but a Christian one. Religious skeptics like to talk as if the natural state of man is non-sacred, but the evidence clearly points in the other direction. Mankind is plainly a religious being, one that has spent the entire span of recorded history relating to the divine, both by seeking after it and responding to it. The few aspects of Eliade’s book that we spoke to in this short review provide support for this worldview and show that the claims of Christianity are backed up by the finest historical and sociological research.