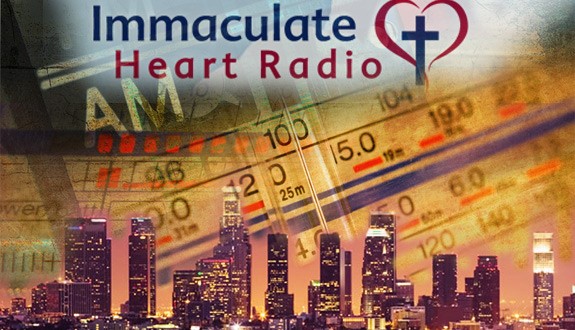 Thanks to Immaculate Heart Radio for the chance to guest-host several times in the past couple of weeks. Here is the audio:

Star Wars movie nears release – biggest phenomenon in America? Are we “longing for nostalgia”, wanting to go back to our childhood?
The lure of good movies – a search for meaning in an apparently purposeless world?
Is “Crossfit” a religion? More akin to a church than a gym.
The desire to escape reality. 40+ year old man in Canada decides to live as a 6-year-old girl.

Caller: This consumerist frenzy for Star Wars: Isn’t it a new form of idolatry? Are there any fixed truths?
Atheist billboards, and commentary on a morning talk show. Should Atheists be “pushing their beliefs on others”. Should Christians be trying to change people?
Judgmentalism: Can we create a society free from judgementalism? Can the Church get away from being so rulebound?
Do all religions “teach the same thing”?

Do Muslims and Christians worship the same God? Wheaton College fracas on the matter, Francis J. Beckwith weighs in.
Beckwith’s analogy of “Fred and Bob” regarding Thomas Jefferson. Don gives a counter-argument.
It is helpful to say that Christians and Muslims worship the same God – even if we agreed that it was true?
“Slate” mag concerned about “excessive Christianity” on The Voice.

Is Jordan Smith (The Voice) a “messianic” figure? Is today’s culture looking for a “savior”? Were the “middle” Star Wars movies bad because religion was sanitized from them?
The Force vs. Materialism. Is there “something else going on” in the universe?
Was Luke Skywalker “radicalized” and a “terrorist”? Peter Farquhar article on Star Wars as “jihad”, continued. Who really are the “good guys” and the “bad guys”?
Caller: Why do we use the term “radical” when it seems Muslims are just practicing what the Quran says?

Don shares about his conversion to Catholicism, and background in Apologetics.
The so-called Reformation: Were there unintended consequences? Are we seeing reality correctly? “How to Talk to a Skeptic” book.
The paradoxical results of indoctrination in higher education. The theology of rebellion.
Authority: What happens when everyone is their own highest authority?

81 year old man faces death – and finally gets religion. How is it that we would wait so long to ask the most important questions?
Losing our Religion – book about religious “deconversion”. Worldview choices: Where does Truth come into the equation? New Star Wars movie: Was the villain evil enough?
Revelation 12, and the battle of Satan against the Church. Do we see the battle underway today?
Having trouble picking Christmas gifts? Try cash. . . Crisis article: Does Christmas “come from a store”? How the Secular Humanists Stole Christmas.

“A Charlie Brown Christmas”: Is there a significance to Linus dropping his blanket? “Happy Holidays” vs. “Merry Christmas” – is it a war between the two?
Worldview wars: Will Christians soon be forced to act like Atheists in public? Thomas Jefferson’s view on religion in the public sphere.
Caller: I’m a “secular leftist”; I’m offended that we leftists are being blamed for the fight against Christmas.
Caller: I work for a school district; I don’t see an anti-Christmas sentiment at my school. Caller: Secularists are taking all the joy and profit out of Christmas and leaving us with “Happy Holidays”; we should boycott.

What do you say when an Atheist sneezes?
Can one leave the Church – and keep Jesus? John Piper, arch-Calvinist, says “No”.
Caller: I left the Church at age 19; Jesus DID stay with me, but He also led me back to His Church.
Do Jews “need Jesus” to be saved? Don discusses statement from the Vatican. Paul’s discourse in his letter to the Romans.