How Bad Does it Have to Get Before You are Going to Say Something? 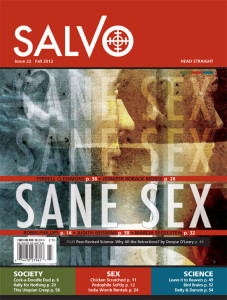 The latest edition of Salvo Magazine has a very interesting interview with Jennifer Roback Morse. She knocks this question out of the park:

I just read an interview with a conservative columnist who opposes same-sex marriage but will not write about it because he doesn’t want to offend his gay friends. And I think that applies to many people who are concerned about hurting feelings. What about those people?

Well, my first question to them would be whether they get the argument as to why [the redefinition of marriage is not harmless.] Because once you get it, the question is, what are you going to do about it? I would say there are some people that you’re going to offend if you speak out. You have to decide whether you’re going to be on the side of truth or not. How bad does it have to get before you’re going to open your mouth? Marriage has been redefined in Canada. And the province of Quebec came out with a policy against homophobia. In that policy, the provincial government said it was going to work to stamp out not only homophobia, but heterosexism also. Heterosexism is the view that heterosexuality is normal.

Look. Heterosexuality is normal in our species. We are a species that propagates by sexual reproduction. If the government gives itself the power to wipe out a belief that is actually true, what that means is that the government’s given itself a blank check to do whatever it wants. Now they’ve set up a registry where anyone can anonymously report a homophobic act. That means they’ve set up something that will allow people to spy on their neighbors and anonymously make accusations. How bad does it have to get before you’re going to be willing to offend someone at Thanksgiving dinner? What’s going on in Quebec is a very ominous development.