God is not Arbitrary and Capricious

I recently read a skit in a children’s curriculum book about the work of Christ on the cross. The instructions went something like this: First, choose a kid from the audience that you are sure does not know that much about Christian theology. Have him come to the front of 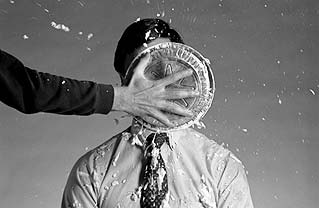 the group and explain that he has been selected to take part in a test. He will be asked a question and if he answers correctly he will receive a bowl of candy (or some other prize of your choosing). However, if he gets the question wrong, he will get a pie in the face. You then ask the child to define substitutionary atonement. When he is unable to answer, start preparing the whip cream in a plate for the big event. However, just before you hit him with it, a person from the audience (someone you have pre-arranged) should jump up and run forward, offering to take the child’s punishment on herself. You then smash the pie into the substitute’s face, explaining that, in the same way, Jesus was our substitute. He took our penalty on the cross.

Now, I suppose I can see some small glimmer of truth in this skit, but it is overshadowed by the fact that the instructor – the God figure – comes across as so capricious and unfair. Think about what the child at the front would be thinking. If he is anything like me, it would be this: “What did I do to deserve to be sitting here? How am I supposed to know what substitutionary atonement means? What does that have to do with anything anyway? Why should I get a pie in the face for not being able to answer correctly? And what sense does it make for someone else to take a pie that neither of us deserves? The whole thing is silly and pointless.”

The kid would be right. The whole thing is silly and pointless because it is completely arbitrary and unjust. The rules were made up by the instructor and impossible to pass, the punishment bore no relationship to the “offense,” and the solution to the made-up “problem” was similarly random. The whole situation was contrived. The skit writer made the instructor seem capricious. God is not like that.

I won’t take time to discuss the specific problems with the skit writer’s view of atonement here; I bring this example up simply to point out that the whole premise of the curriculum is flawed. It makes it seem like God’s story could have been fundamentally different, that God could have defined sin in a different way or made the punishment for sin something different than it is, or come up with some other means to save man than having Jesus die on the cross.

This is false. Taken to its logical ends, this notion distorts the biblical witness and makes it pointless to try to make too much sense of God’s actions or find a unity of purpose to God’s story. It makes it seem as if God does stuff for no other reason than he decided to do it and there is no essential rhyme or reason to the whole project.

Unfortunately, this bad theology is keeping skeptics away from God. Rather than revealing a loving father graciously and consistently working to draw people into the relationship for which they were created, the skit above portrays an arbitrary and capricious God with a bit of a mean streak who could never be trusted. How can we ask an unbeliever to follow someone like that?