Blessed are the Down and Out

As I pointed out elsewhere, Jesus’ understanding of what constitutes “the blessed life” is radically different from the world’s. The culture tells us to go our own way, for example, while Jesus teaches us to be meek and submit to the Father’s authority. In this post we will consider this divergence in two more categories of our experience: 1) The degree to which our life circumstances are meeting our expectations and desires and 2) the amount of confidence we have in our ability to control and direct your life to meet those expectations and desires.

In general, there is a close correlation between life circumstances and our self-confidence. If everything is going well, we tend to believe that we are responsible for that success and that it will continue into the future. When events take a turn for the worse, our confidence tumbles as well. 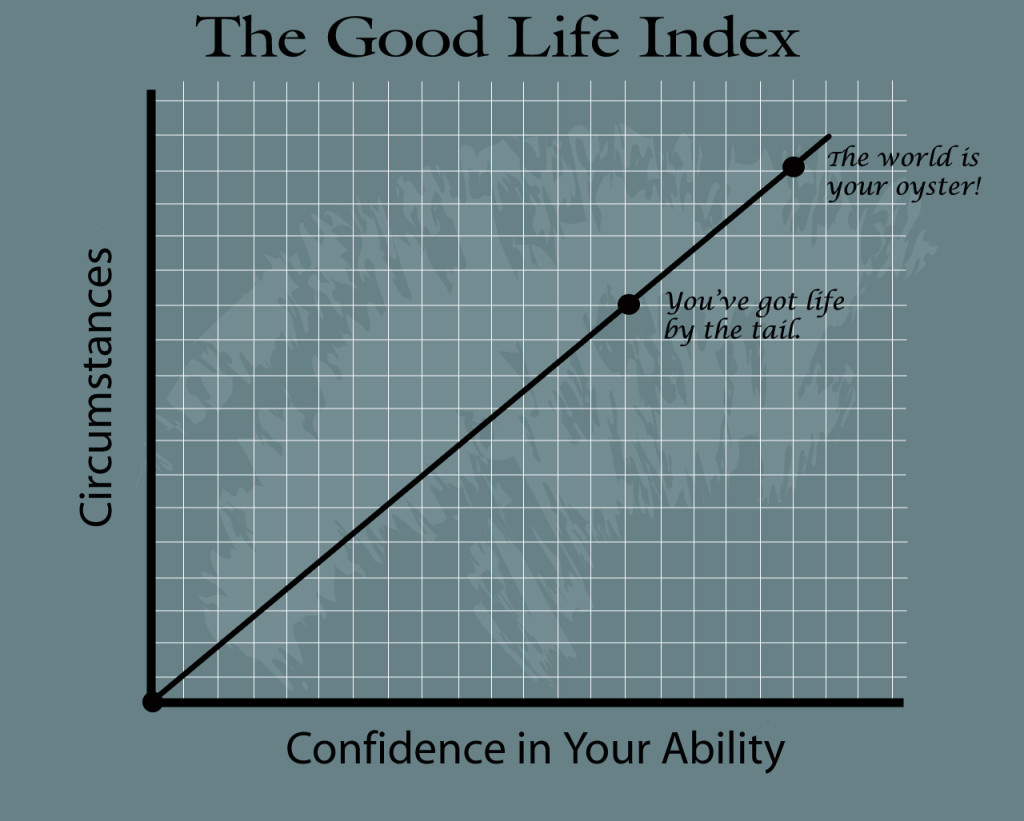 For example, in the high corner of the graph might be the college football superstar who just signed a huge contract in the NFL. For him nothing seems unattainable. In the other corner we would place the guy who took some quilting classes at a JC for a couple of years before becoming eligible for the NFL, then was paralyzed in a car accident the day before the draft. He is stuck with no marketable skills, no education, and little hope for controlling his future.

Who does the world consider most blessed? The person higher up on the graph, of course. Indeed, the whole point of many people’s lives is to try to climb up that line.

However, here again Jesus teaches the opposite.  He says, “Blessed are the poor in spirit, for theirs is the kingdom of heaven. Blessed are those who mourn, for they will be comforted” (Matt. 5:3-4).

Who does Jesus have in mind here? People who mourn do so because some tragedy has befallen them, generally one that is outside of their control. In other words, mourning is closely associated with life circumstances that have taken a turn of the worse.  It is an attitude toward your situation. On the other hand, being poor in spirit is about your attitude toward yourself. One who is poor in spirit has no confidence in his ability to get himself into a better situation. Jesus seems to be talking about those who are at the bottom corner of the line.

One key to making sense of that is to remember how Jesus sees the world. He is focused on the big picture. As such, he understands that we are sinners separated from God and that this problem takes precedence over all others. He also knows that humans have no power to fix that on our own; we need God’s help to get back to him. However, Jesus also knows that we are prone to pride, and that we often we reject God’s offer out of foolish arrogance.

C.S. Lewis offers a good example of this attitude in The Pilgrim’s Regress. The main character, John, is on his way through life when he comes to a great canyon separating him from the kingdom he had been seeking. A woman, Mother Kirk, explains that the only way to get to the other side is for her to carry him. Seeing this as an insult, John refuses and sets off to find his own way. He never does, of course, and later comes to admit that Mother Kirk was right.

One of Lewis’s points here is that we are dependent creatures.  We simply can’t make it on our own. Unfortunately, when things go well, we tend to forget this truth and give ourselves the credit for our success. Only when we mourn and life seems to get out of control do we even think about turning to God. Only then are we humbled enough to see reality as it is.

Therefore it is easy to see why Jesus would say that those who don’t have that success and subsequent pride are in a better spot. They are closer to realizing their need for God. While the world thinks self-confidence and pleasant circumstances are a sign of the blessed life, Jesus explains that the down and out might actually be in a more favorable position.

For example, consider the “highs” and “lows” in the following lives: at what point would we consider each person “blessed?”

King Nebuchadnezzar was the ruler of a powerful empire, a man at the height of worldly power. One day while walking on the roof on the royal palace he congratulated himself on his success:  “Is not this the great Babylon I have built as the royal residence, by my mighty power and for the glory of my majesty?”

Even as the words were on his lips, a voice came from heaven, “This is what is decreed for you, King Nebuchadnezzar: Your royal authority has been taken from you. 32 You will be driven away from people and will live with the wild animals; you will eat grass like the ox. Seven times will pass by for you until you acknowledge that the Most High is sovereign over all kingdoms on earth and gives them to anyone he wishes.”

Immediately what had been said about Nebuchadnezzar was fulfilled. He was driven away from people and ate grass like the ox. His body was drenched with the dew of heaven until his hair grew like the feathers of an eagle and his nails like the claws of a bird.

At the end of that time, I, Nebuchadnezzar, raised my eyes toward heaven, and my sanity was restored. Then I praised the Most High; I honored and glorified him who lives forever. His dominion is an eternal dominion; his kingdom endures from generation to generation. (Dan 4:31-34)

Or consider the prodigal son. He received his inheritance and “lived it up” until the money ran out. But “after he had spent everything, there was a severe famine in that whole country, and he began to be in need. So he went and hired himself out to a citizen of that country, who sent him to his fields to feed pigs. He longed to fill his stomach with the pods that the pigs were eating, but no one gave him anything” (Luke 15:14-16). Then he went back and threw himself on the mercy of his father and was restored.

That restoration is what we all need. May we not have to reach the point of living like animals to seek after it.